The History of The Peppered Moths

The peppered moth is a moth that was drastically affected by soot pollution in England in the 1800's.  In England in the 1880's, soot covered much of the landscape, following the advent of the Industrial Revolution. Previous to the soot problem, the light-colored variety of the moth was common in England. Its speckled coloration helped camouflage the moth when perched on birch tree trunks. This type of camouflage is called cryptic coloration. After pollution covered many of the trees with a dark layer of soot and killed the light, whitish-gray colored lichens that lived on the tree trunks, a dark form of the moth was observed (presumably since the light-colored variety was no longer camouflaged when at rest on trees, and they were caught by birds - the dark-colored variety were now better camouflaged and more likely to survive and reproduce).


The British biologist E.B. Ford wrote about the peppered moth in 1937  and hypothesized that cryptic coloration explained the prevalence of the few, melanic (darker) form. In the early 1950's, the British doctor H. B. D. Kettlewell studied the phenomenon from a genetic standpoint. He performed mark-and-recapture experiments on the peppered moth, releasing both light and dark moths into either a polluted or an unpolluted forest. After a time, he recaptured moths from both areas. In the polluted forests, he caught more dark moths; in non-polluted forests, he captured more light-colored moths. 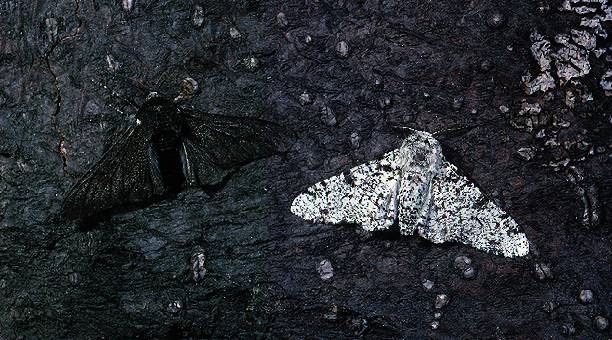 Create a graph to represent the results of your data from the activity.